Where to Find the Best Live Music in Austin, TX | Twisted Texas Tour

Where to Find the Best Live Music in Austin, Texas

Austin is the self-proclaimed Live Music Capital of the World.  We have more live music venues per capita than any other city in the US (except Vegas, but does that really count?).  On any given day, it often seems as if live music is everywhere. At the airport, on the sidewalks, and in every cute little coffee shop from Hwy 183 to Slaughter Lane.

Finding the true heart of Austin’s live music scene can be a little harder than you would expect.  Sure, there’s music. But finding a live show that makes you want to tell the world about it, rather than rip your ears off, is sometimes a bit more challenging.  I have survived beatboxing catastrophes, EDM dance parties with no dancing, and a man who played the piano and blew a whistle every time he missed a note before restarting from the top.

Here are some local recommendations for finding live music in Austin that is not that: 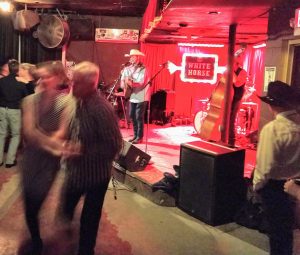 While Austin definitely marches to a different beat than the rest of Texas, we ain’t ever forgotten our roots.  We love a good country fiddle and the sound of well broken-in cowboy boots shuffling across a dancehall floor. The Broken Spoke is heralded as the last of the true Texas honkytonks, live music can be found here Tuesday – Saturday.  The dance floor is big, and anyone standing around is fair game to be asked for a dance. For those looking for country western dance with an Austin twist, we love The White Horse.  This East Side hipster honkytonk is the perfect mesh of Austin’s multiple personalities.  Patrons may have less pearl snaps and cowboy hats (replaced with well-oiled beards and skinny jeans) but the two-stepping spirit is alive and well.

The Elephant Room is a basement hideaway right in the middle of downtown.  On any given night they may host a blues duo or a 9-piece band, but the music is always good and the atmosphere is super low-key.  Another long-standing Austin venue is Antone’s, a part of our city’s music scene since the 1980s.  Although Antone’s has moved several times, its current location is convenient for those hanging around downtown.  They have live music nightly, with covers varying depending on the act.

While there are many places to break it down in Austin, we are offering up only our favorite.  Barbarella is an unassuming, divey space in the Red River District. If you show up before eleven, you will think this recommendation a farce.  But as midnight draws near, the dance floor packs full with crowds of happy, tipsy people dancing around like they just don’t care. No fancy moves, no fancy drinks, and definitely no fancy vibe…but that’s what locals love.  Every night is a different theme, with Thursday’s Grits & Gravy (50s & 60s) night being our personal favorite. Although they stop serving, the party often continues until 3 or 4am.

A list of Austin’s best live music venues cannot be written without a tip of the cap to The Continental Club.  This long standing establishment has been a part of our landscape since the 1950s, hosting acts like Stevie Ray Vaughan and Dale Watson and everything in between.  The club has two spaces: their main lounge and an upstairs attic space that typically hosts small acoustic acts. Donn’s Depot is another old timer that keeps to itself on far West Sixth.  The converted space was an old train depot, and the women’s restroom is located in a train car.

While few out-of-towners move outside of the downtown area, there are many amazing venues to check out for those brave enough to press the button for an Uber (scary we know).  North Austin boasts Ginny’s Little Longhorn, a tiny country dive bar with a dance floor.  Ginny’s claim to fame is hosting Chicken Shit Bingo every Sunday at 4:00pm.  In the completely opposite direction, Moontower Saloon is an out of place oddity in that this giant outdoor venue is located in the middle of…suburbia.  Or close enough to it. But with live music nightly, volleyball courts, and ample outdoor seating it is easy to see why Austinites still flock to this out of the way spot.

The Best Way to See Live Music in Austin

On the Twisted Texas Live Music Experience of course.  We may be a little biased, but we have the 5-star TripAdvisor reviews to back us up.

Snagging a seat on our Austin Live Music Experience is like hitting the “easy button”. We take you to three awesome live music venues. Locations vary week to week, but we work with a dozen fun and funky places to catch live music. Maybe it’s two-stepping to a hipster country band or dancing to 90s tunes…you never know what to expect, but you can always expect a good time!

The best part is that while we visit THREE Austin live music venues, you get a fourth band for your own private concert…on board the bus! Our local musicians jam everyone’s favorite singalongs as we go from bar to bar. At the shows, they join the party…you’ll find them taking shots at the bar, posing for pics with you and your squad, and answering any and all questions you’ve ever had about life as a wanna-be rock star. It’s a behind-the-scenes experience like no other.

Brunch. The one thing that can drag every sleepy (and possibly hungover) soul out of bed. You've never brunched like this before!

Don't miss out on Austin's craft beer boom! Spend your time at three of Austin's most badass breweries. Drink special/new releases, and party with our live band on board the bus!

Three rocking live music venues. Live music on board. Insider knowledge on the city’s music scene. All in 3 hours. YOLO.